It just dawned on me that I have not been keeping up with my end of blogging with letting you all know what I am working on, SO I will call this my work in progress commissions.....
The first commission I want to talk about is of a dog in Denver named BOBO. His finished commissioned portrait is below. He is a yellow lab. The second commission below is of a rescued dane named Zach. This is his second portrait done by me...Smile. 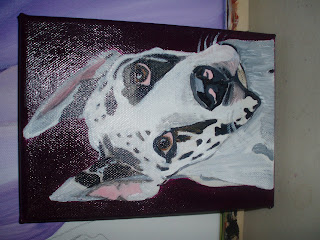 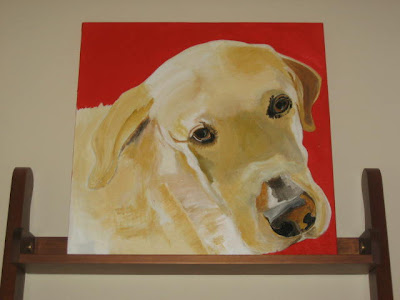 Posted by Unknown at 4:46 PM No comments:

Press Release from the Wildlife Experience

This summer The Wildlife Experience is featuring two new exhibits: Wolf to Woof: The Story of Dogs and Paws & Reflect: Art of Canines as well as the showing of Wolves in the Extreme Screen Theater.
Wolf to Woof: The Story of Dogs explores the history, biology and development of dogs and the role of dogs in human societies. Paws & Reflect: Art of Canines features artwork in acrylic, mixed media, oil, pencil, watercolor, gouache, scratchboard and bronze sculptures celebrating the canine. Wolves gives audiences a look into the reclusive lives of wolves, their pack behavior and an opportune glance back at the plight of the gray wolves struggle to recover from near extinction.
In addition to exhibits, visitors will also be treated to “paw”-some activities such as:
ß Dog Days with My Best Friend – entries will be displayed in the Habitat Hallway and a Weekly Woof will be featured on our website
ß Live Wolves presentation – July 7th
ß Live Cheetah presentation – July 21st
ß Dog Day Expo – August 4th
ß Daily stories about dogs and wolves
ß Police Canine Unit visits and demonstrations
ß Weekend pet adoption opportunities & artist appearances
A natural history and wildlife art museum, The Wildlife Experience is located at 10035 South Peoria St., Parker, CO., one mile east of I-25 at the intersection of Lincoln Ave. and S. Peoria. For admission prices, museum and giant screen theater hours, and information on special exhibits, please call 720.488.3300 or visit thewildlifeexperience.org.
Posted by Unknown at 10:31 AM No comments:

For pet trainer to the stars, short leash is not the answer

For pet trainer to the stars, short leash is not the answer

Dog trainer Tamar Geller says her horrific childhood helped her understand "what it means for a pet to be misunderstood, to be used as a scapegoat in the family dynamic."

Tamar Geller, a former Israeli intelligence officer who became a dog trainer to the stars, says the most important thing animal lovers can do for their dogs is to "empower them." Geller, who calls herself a "life coach for dogs," offers her philosophy and specific tips for pet owners in her just-published book, 'The Loved Dog: The Playful, Non-aggressive Way to Teach Your Dog Good Behavior' (Simon Spotlight Entertainment, $24.95).
"I'm completely against the notion of having your dog be submissive to you," she says. "There's a difference between submissive and well mannered. I want them to be empowered and well mannered."
In her book, Geller, 42, describes her childhood as brutal. She says her mother, who is now dead, was an "emotional monster." Her father, who was often away, did not protect her, she says. "I never felt that I was loved or that I belonged in my family," she writes.
It was this horrific background that gave her a special affinity for animals, she says, and an ability to see things from their point of view.
"I know what it means for a pet to be misunderstood, to be used as a scapegoat in the family dynamic. I know what it is to live in quiet desperation, to live in uncertainty, where you don't know if you're going to have a home, whether your parent is going to hug you or smack you for the same behavior.
"When I wrote this book, I did not write it as someone who understands dog behavior," she says. "I wrote it as someone who has been there."
Boasting a client list that includes celeb pet owners Oprah Winfrey, on whose TV show she appeared Wednesday, Ben Affleck, Olivia Newton-John, Eric Idle, Nicollette Sheridan and Goldie Hawn, Geller has been training dogs in Los Angeles for 19 years. She founded The Loved Dog Center, a dog day care in West Los Angeles, in 1996, and also does in-home training.


* Gen. Petraeus: 'We are just getting started'
* U.S., Russia dispute over missile defense
* Mortgage rates dip; 30-year averages 6.16%
* Rapper Eve arrested after L.A. car crash
* For Raiders, logic says JaMarcus, but ...
Her career path sounds like something out of a film script. She became interested in canine behavior while an intelligence officer in the Israel Defense Forces, which she joined at 18. There, she witnessed military dog-training methods, which she says included prong collars, choke chains, hitting, pushing and bullying.
After her service, she spent a year backpacking through Southeast Asia; then, before returning to Israel, she made what was to have been a short stop in Los Angeles. She saw a billboard advertising a Pink Floyd concert and decided to stay for a few weeks to catch the show. During that time, she contacted local dog trainers to learn American training methods and went along on house calls as an observer.
"We went to a home where they had a cocker spaniel who kept stealing socks," she says. Geller was able to change the dog's sock-thieving ways by teaching him to fetch and play hide-and-seek.
The dog's owner was saxophonist Kenny G.
"It was a minute before he became big," Geller says. He and his wife recommended Geller to their friends in the entertainment community, and her star-studded client list grew.
She advocates a kind, gentle approach to communication with canines. "You don't have to be a dictator," she says. "There are two kinds of leaders, the Saddam Hussein type or the Gandhi type. Both types, people listen to. What kind of dog parent do you want to be?"
The most important thing dogs have to teach humans, she says, is "to love without holding back, to love as if you've never gotten hurt. A dog is the incarnation of love."
-------------------------------------
FOR A GOOD DOG, MEET BASIC NEEDS
Problem behavior in dogs results when any one of these seven basic needs is unmet, Tamar Geller says:
· A sense of security: Dogs need a steady routine and owners they can count on for love and safety.
· Companionship: Dogs are pack animals. They need attention and interaction with humans.
· Understanding the hierarchy: They need to know their owner is the leader. When two or more dogs are in the home, owners should let them work out the rest of the hierarchy.
· Surprises and excitement: Bored dogs find ways to entertain themselves by digging, chewing and barking. Treats, walks and visits to the dog park motivate good behavior.
· Food and exercise: In addition to a balanced diet, dogs need exercise to allow them to burn off energy. Usually the younger the dog, the more exercise is needed.
· Mental stimulation: Dogs love to learn and enjoy playtraining sessions.
· Love and connection: There should be a solid bond between dog and owner.
Posted by Unknown at 10:59 PM No comments:

Meredith Brooks of Lil' Angel is now noted as one of Denver's up and coming hand - painted pet portrait artists.

Here is the new studio